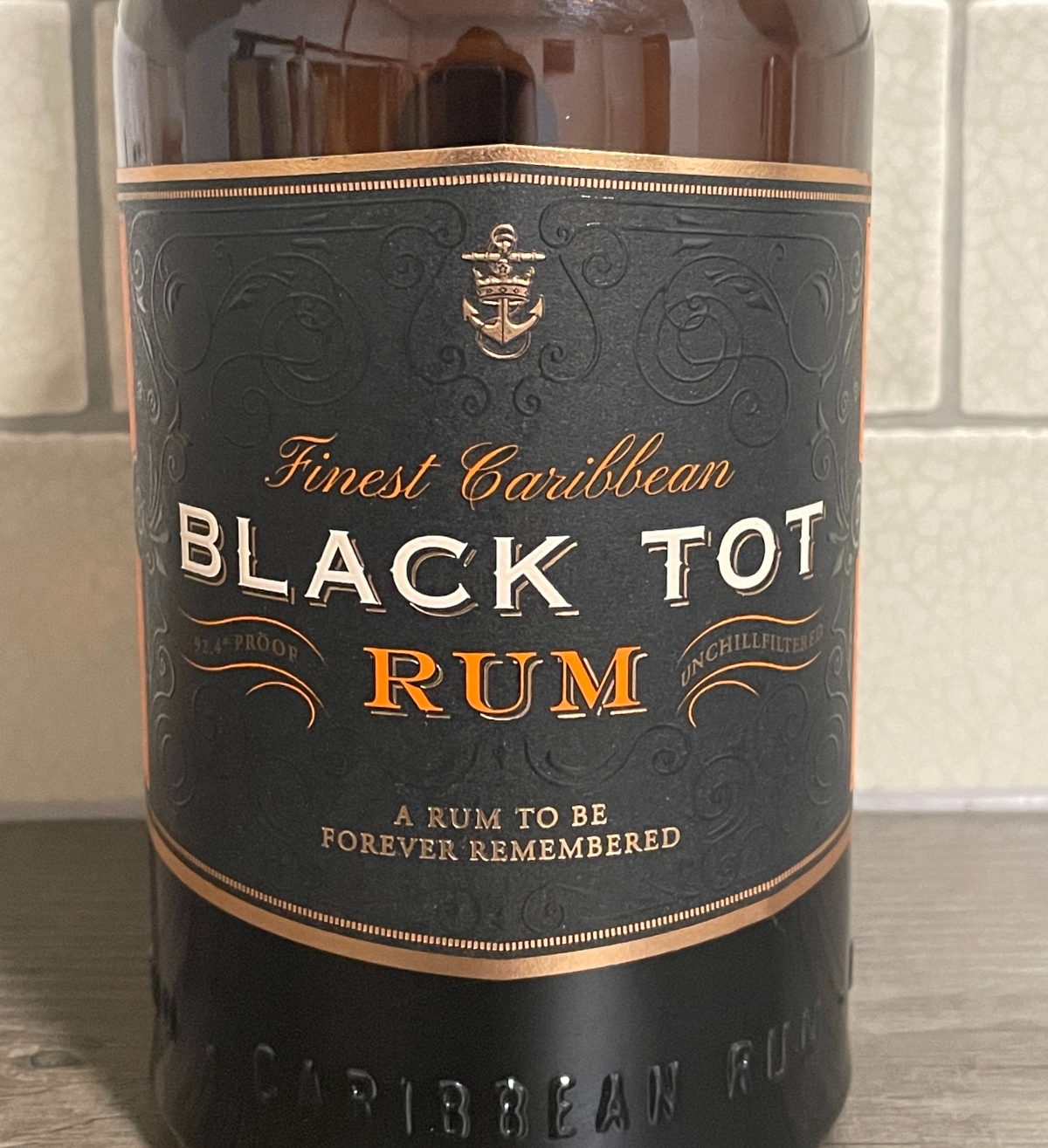 This is by no means a new release so, in true RumLondon style, I’m late to the party. Soz. Again, other reviews are available (and likely more helpful).

The story behind Black Tot merits a bit of space.

There has long been an association between seafarers and rum – lots of it marketing fable sadly. However there was a very definite link with the Navy – albeit a complex one that often overlooked the ethical and moral arguments around a product made in European colonised lands and transported (predominantly) to those governing countries for consumption.

I’m not going to go too much into depth about the history of rum and colonialism because there are far more insightful, thorough and well researched articles available – I’d recommend reading Matt Pietrek’s EXCELLENT pieces at Cocktail Wonk, this Wikipedia article on the Colonial Molasses trade and this one on colonialism within the rum trade as good starting points. Feel free to get in touch with me by email or Instagram if you’ve got anything additional on the matter you’d potentially like me to share.

I must also make it clear that the above discussion is not a factor directly affecting this product, rather they are broader issues pertaining to the category as a whole – whilst most of my asinine reviews consist of me telling you a spirit is shit, superb, or something in the middle, I think it’s incumbent upon us to also think about the provenance of what we buy and the history surrounding how it came to be.

UK sailors in the 18th and 19th century were issued a daily ration or ‘tot,’ of a various spirit or beer, eventually settling predominantly on rum – a process which continued until July 31st 1970 (now referred to as ‘Black Tot Day’), when Parliament voted to curtail this practice, owing to the competing ideals of managing the complex demands of a modern navy vs actively giving those in charge of operating said complex systems high proof booze on the daily. You can see the sense in that.

The remaining rum was sealed in stone flagons (each holding just over 4.5litres) in various warehouses, with a large portion saved for use only at state functions and Royal events. As supply depots were sold and cleared out, many of these flagons made their way into the hands of private collectors and retired members of the Navy.

To get more information, I got in touch with Mitch Wilson (@mitchsaidthis), Global Brand Ambassador for Black Tot and asked him to do my job fill in the backstory as to how Black Tot first came to be (both in its original “Last Consignment” guise and as Black Tot Finest Caribbean [FC]).

Fast forward from 1971 to the early 2000’s and a former sailor “…brought a flagon of Navy Rum to Sukhinder Singh (co-founder of The Whisky Exchange) to buy – he had never seen it before, but after he purchased the first one, more sailors approached him with flagons until we decided to look further into them (and more importantly taste them!) He couldn’t believe how good the rum was, and so went looking for all the remaining flagons that were left after Black Tot Day. After about two years of tracking them down, he discovered there were several ‘vintages’ of flagons bottled in different years – each had it’s own flavour profile. He picked a blend of these flagons that he liked and voila, Last Consignment was born.”

Black Tot [FC] is the continuous, entry level offering in the Black Tot range – reportedly the culmination of two years worth of trial and error, amounting to 26-odd recipes before settling on the one presented today.

With regards to having a continuous Navy rum release, Elixir (Elixir Distillers, the independent blending and bottling arm of The Whiskey Exchange) didn’t release Black Tot Last Consignment with that in mind, but “…there were discussions early on along the lines of ‘what do we do when the flagons run out?’ as they were conscious the rum couldn’t be replicated by any modern methods (many of the distilleries are now closed, the barrels used in ageing are different, and very few people transport rum barrels by sea any more). Also the rarity and therefore expense of something like Last Consignment meant it was a special occasion rum rather than the ‘everyday tot’ that the sailors would have enjoyed. After many years of discussion, Black Tot [FC] would be borne out of these conversations.”

This is molasses based and entirely tropically aged in 200 litre Ex-Bourbon white American oak casks, before enjoying a trip to Scotland where it is blended and bottled.

Guyana has the lion’s share of the representation here, with a pot/column still blend – 40% aged 3-5 years, 20% unaged. 5 year old column/pot still from Barbados makes 35% of the final recipe, with 3 year old Jamaican pot still (5%) rounding off the mix.

The final product is a very specific 46.2% ABV (note: this isn’t a Navy Strength bottling, which would be 54.5%) and is not chill-filtered, nor does it have any sugar added, although they note that 0.64g/L is introduced from the barrel wood itself. With regards to the bottling strength, it’s back to Mitch:

“The ABV for Black Tot [FC] came about through a combination of factors. Primarily – the blend tasted good at that ABV. Secondly it meant that by being above 46% we didn’t need to chill-filter the rum, leaving all the texture of the liquid intact. Then there are considerations of versatility and useability – 46.2% ABV is a handy ABV for bartenders – it has a bit more punch than your standard 40% offerings, but not so high an ABV that both the price and the strength of the liquid is too much to use it on its own in a cocktail. Typically we see higher ABV rums used as an extra splash or addition to a lower ABV blend which helps keep both your costs (and your guests) intact.”

Whew. That was a long intro to a brief review, wasn’t it?

There’s some in-depth information on the blend on their website but for convenience’s sake I’ve added it here. Also, if you’d like to hear all of the above from the horse’s mouth, there’s an excellent Youtube interview between Mitch and Sukhinder that you can watch here.

Nose – Caramel and macadamia show their faces straight off the bat, with brown sugar and dark chocolate following quickly on their heels. With some time, a faint touch of papaya, milk chocolate and ripe banana develops (presumably thanks to the Jamaican component).

Palate – An pleasantly oily mouth feel initially, made more noticeable I suspect due to the brash Jamaican overproofs I’ve been toying around with recently. 5 minutes later and there’s a slight bitterness intermingling with apricot, caramel, ripe banana, dried sultanas, ginger, black pepper and orange peel. A surprisingly complex and immensely enjoyable experience actually, especially given the price point (£39.95 at The Whiskey Exchange currently).

Finish – Medium length, shorter than I’d like to be honest but, again, can’t really complain at this price point and target market.

Scores on the door:

This is immensely enjoyable. I really want to place it head to head against some Pussers but, unless that blows this out of the water, the combination of taste, producer transparency and price means that this looks to be a staple in my home bar. (OK, it’s actually some plastic boxes in the shed, but calling it a bar makes me feel fancy).

Doc by day (sometimes night), rum drinker by night (sometimes day). I'm a shift worker, not a lush. Other opinions are also available. View all posts by Mr RumLondon